Co-production and the power of community "it starts with hello"

Abby leads the West Midlands regional approach to co-production which includes a commitment to TLAP's Making it Real (opens new window) framework. In this blog, which originally appeared on Abby's blog (opens new window), she reflects on the importance of co-production in developing preventative, trusted and outcome-focused public services.

I recently spent 28 minutes listening to ‘the case for public service reform (opens new window)’ on BBC Radio 4. It was led by Chris Naylor (former CEO of Barking and Dagenham Council) and featured a number of contributions from guests with experience of leading local government / public sector change.

It’s well worth a listen by those interested not only in improving public services but in ‘building a preventative state’ — one that does something about demand rather than focusing on achieving efficiencies that only help us to keep up with it. To do that well, as is the focus of the listen, requires changing the way we work with and prioritising how we build relationships with people in communities.

The reason for starting the blog in this way is because this listen gave me a final nudge in putting together some reflections about the importance of co-production, something I (and colleagues) have been reflecting on a lot in my role at West Midlands Association of Directors of Adult Social Services (opens new window).

I’ve been thinking carefully about how the work of social care improvement can be more participatory — how we democratise the space so that individuals in our communities can contribute as equal partners alongside us to make experiences and delivery of health and care in the Midlands as best and inclusive as it can be.

There is an abundance of knowledge, experience and skill in the areas we all live. When combined with the expertise and resources of our organisations this coalition could be a real mover and shaker in public service reform.

But it’s also got me thinking about the broader role of community and strong local relationships in supporting social care. I read an article (opens new window) a while back by TLAP and Local Trust and this particular quote has stayed with me:

Wellbeing (arguably the backbone of the Care Act 2014) “is heavily influenced by the number, diversity and quality of relationships we enjoy… and it is these relationships with others that give us a sense of connectedness, belonging and attachment to place"

Moving from a national role to one with a focus on the region I live has taken place in unison with settling into a new community. The impact of participating more actively in my community and developing new relationships where I work and live has played big role in supporting my own prioritisation of co-production.

I was introduced to Myron’s Maxims at a recent LGA & Rethink Partners masterclass on [digital] inclusion which I share in case it resonates with others in the same way it did me — particularly as we look at supporting the period of change ahead of us in health and care (assurance, integration, reform etc): 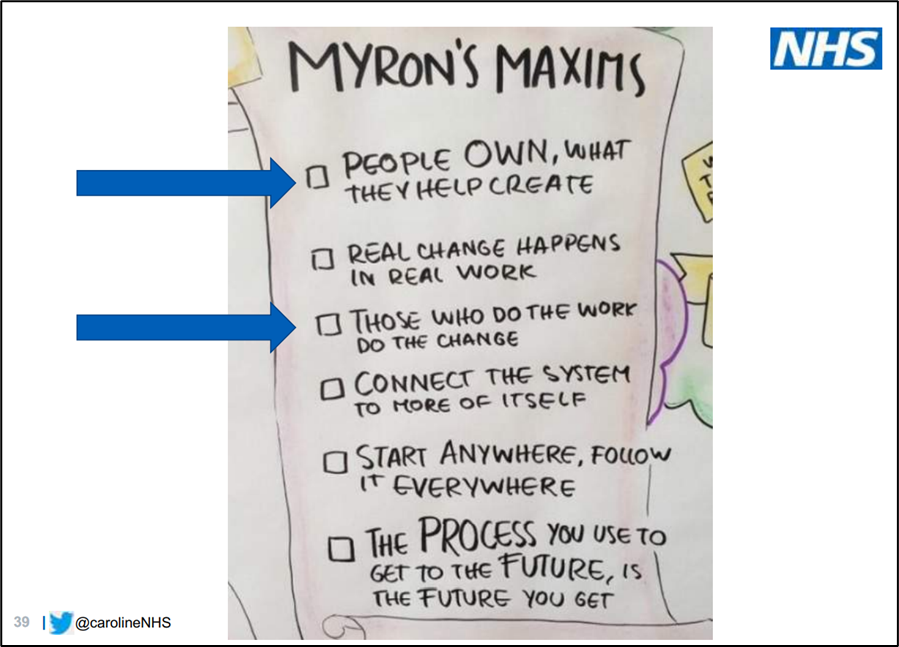 I feel deeply about the importance of co-production and power of community in developing preventative, trusted and outcomes-focused public services. It feels like responsible work but I’ve learned that the trick is not to overthink it and start small with a conversation with like minds.

This is the approach we’ve taken in the West Midlands and through new relationships with and guidance from citizens across communities in the West Midlands, we’ve got some exciting ideas in the pipeline — ideas I look forward to sharing in another blog.

But my advice to those just getting going, as 20-year-old Frontline Officer Joe Holmes says in describing his approach to supporting residents in Barking and Dagenham, ‘it starts with hello’*.